It’s a regular shift at work, nothing particularly special is going on. Everyone’s in the process of closing down from a private-hire event.

The venue is located underground, down a fairly narrow staircase. The owners had to hang a huge, red neon sign out on the street so that anyone can even find the place.

Megan is a petite girl with cropped blonde hair and curves. She likes to call herself a dancer, but she always leaves out the part about dancing around a pole.

Clearing up with her is:

Let’s call them B, NG and X, since they’re all a little irrelevant to this.

Megan is in the middle of pulling soaking-wet napkins out of the glasses on the table.

Why the fuck do people always think this is helpful?

SUDDENLY – bang! In rush a gorgeous and tall dark-haired guy, with a stunning blonde accomplice. They have guns in their hands, but nothing to cover their beautiful faces.

“Everyone,” The First Guy says. “Get down on your knees right now. I want all of the money outta your safe.”

He’s very aggressive, and NG is positively wetting herself.

Megan calmly brings herself down to her knees and raises her hands above her head. She’s wearing this fabulous little black dress with a plunged neckline and tiny sleeves. It’s so short that when she raises her arms, her tiny orange thong is slightly on display. She bites down on her lip in embarrassment.

“[Blondie], gather up four chairs and tie them up for me,” The First Guy demands.

Blondie wanders around, brushing confetti off the chairs, one by one, and tries to form a circle; so that every chair is facing another. He lifts up the first three delicately, by the wrists, and sits them down.

When he approaches Megan, she scrunches up her brows as if she’s going to cry.

Putty in my hand already.

He ties her up like the others, threading her hands through the back-bars of the chair and wrapping them in rope. Each leg is also strapped down to a chair-leg with rope, so tight that it would be impossible to wriggle off. The last thing that he does is place a strip of tape over her mouth. Before he meets The First Guy in the office. He gently replaces Megan’s dress, to retain her modesty.

She catches X looking and gives him a look meaning: fuck off – you had your fucking chance.

Honestly, he was such a dickhead – But this isn’t his story.

NG and B exchange looks.

Megan tries to jump in her chair to make some noise.

That’s when The First Guy comes out and screams, “Quiet the fuck down, or I’ll make you sorry.”

I doubt you have it in you, cunt.

“Are you trying to say something, sweetie?” he says. “I can’t quite make it out with that duct-tape over your mouth.” He rips back one half, allowing her to speak.

The First Guy’s eyes glance down towards her thighs. All of the moving has caused her thong to be on display again. He looks back into her eyes, slaps her around the face and sticks the tape back down.

B looks shocked. NG is sobbing. X is a wanker.

She’s a very sexy girl, early-twenties, has so much going for her as well.

Out steps Blondie from the office.

It’s not one-hundred-percent certain what exactly they’re doing in the office. They probably should have brought B in with them to open a safe or something, but they seem to be getting on with things fairly well. The bad-guys also each have a ginormous walkie-talkie each on their belts. They look like Action Men; but sexier.

Megan tilts her head to the side, highlighting the redness of her cheek. She uses her throat to make a sweet moan, like that of a new born kitten or a baby trying to find a nipple for feeding.

Fall into my trap, you stupid man.

Megan forces her throat to choke.

“It’s okay. I’ll grab you something to drink.”

Blondie hands over a nearby half-drank pint of beer.

Instead he provides a full glass of processo.

She nods her head. He rips off half of her duct-tape and feeds her a mouthful of the finest prosecco. She swallows half and keeps the other inside her mouth.

He re-covers her lips and whispers, “This will be our little secret.”

“[Blondie], I need you in here – stat,” The First Guy calls. (Bad guys always shout and then finish by saying ‘STAT’)

The bad guys are both in the office, Megan pushes her tongue against the inside of the tape and filters through a little of the prosecco. It tastes so good on the tongue.

Once she can feel the tape loosening, she swallows all the liquid down and pushes the final bit away with her skilled-tongue.

When she can finally breathe again with her mouth, she lowers her (gorgeous) head down to her left knee and carefully peels the rest back.

The duct-tape is now half-off, thanks to the bad guys loosening it for her and her own improvisation.

I’ve fucking got this.

She uses her (perfectly white and straight) teeth to drag up her dress to her crotch. With the dress still in her teeth, she arches her back, which allows the dress to ride up further and reveal her navel-piercing.

Megan quickly flips the dress up and towards her chest, curving her head towards her navel and locking her teeth on to the belly-bar. She carefully unwinds the piercing and holds both pieces in between her lips. Then, shimmies her dress back into position.

NG looks confused. B looks a little turned on. X is still such an awful guy – he dumped her for her sister. The fucker.

She hides the ball-end of the two components underneath her tongue. She then focuses her eyes behind her, on her right hand. Megan has been complimented hundreds of times on her hands, they’re uniformly perfect – slim and pretty. Not like normal-peoples’ wide, gross-fingernail phalanges.

With a flick of her head, the stem-end of the belly-bar successfully lands in her right hand.

X stomps his foot on the ground: the bad guys are coming back in.

Megan rubs her mouth on her thighs, replacing her tape.

“Sitting pretty, I can see,” The First Guy says. “I knew that I could rely on you desperate fuckers to sit still for me.”

“Oh dear,” The First Guy says, looking at Megan. “Someone has managed to cover up their panties. We can’t have that.”

He walks over and drags up her dress to reveal the orange glow once more.

Blondie looks Megan in the eyes with sincerity.

Two can play at that game, [The First Guy].

She jumps in her chair and the dress falls back into place.

What’re you gonna do now?

The First Guy locks his hand around her throat, peels back her tape and kisses her hard.

She keeps her eyes open the whole time and makes eye-contact with Blondie, pushing out a fat tear.

“That’ll shut the slut up.”

The walkie-talkies barks, “I got the code. [The First Guy], head to the storage room. The real shit is there.”

The First Guy walks heads into a room on the left.

“I’m so sorry,” [Blondie] whispers. “I promise, that’ll never happen again. I’ll protect you. All of you.” He glances around at everyone.

Megan pushes out another tear and nods her head weakly.

He bows his head down, causing his blonde locks to swish in front of his face, like a majestic fucking unicorn or a character from My Little Pony. And then goes into the office, closing the door behind him.

He’s probably gone in there to cry. Fucking grow a pair.

Megan holds the spiked end of the piercing in her hands and saws away part of the rope. As soon as a quarter of it has been torn, she holds it between her fingers and pushes it horizontally, enough that space has been created. She then wiggles out her left hand and unravels the rest of the rope.

Her hands are free.

She unties the rope at both her feet, loosens it slightly and reties the knot.

Her next move is to tear the bottom of the dress and shimmy her thong down slightly, just enough so that it looks suspicious. She punches herself in the face, on top of the spot where The First Guy hit her, gathers the first piece of rope and makes it look as if her hands are still tied.

Come and get me.

She holds onto her chair and jumps, hard.

NG has passed out from the panic. B is red in the face and probably has a boner. Forget about X: he’s not important.

He tries to sew the dress back up with sheer will-power and shakes his head, “How could he do this to you? It’s Just a robbery, he said to me.”

The First Guy enters the room.

Blondie punches him in the face. The First Guy punches back, and misses. The force of his blow drives him onto the floor. The First Guy is unconscious.

Blondie ties his hands behind his back with a spare piece of rope, which just so happens to be right at his side.

“It’s okay.” He rips the tap from Megan’s mouth. And gives her a gentle kiss.

In return, she opened her mouth and pushed her lips back against his, like a hurricane. He moaned and kissed deeper. Megan stole a glance of X.

That’s when she spat the ball-end of her piercing into the back of his throat.

As he’s choking, she pounces up from her chair, the restraints falling away like leaves in the autumn.

Megan flattens her hands around his small throat and thrusts all of her energy. She doesn’t stop until his eyes glaze over.

NG is still passed out. B looks like he’s trying to rub his boner against his thigh. X looks jealous – YES!

The First Guy gathers to his feet.

He is holding the unravelled rope, that had him tied-up previously, in one hand and a knife in the other.

Fucksake, Blondie, you could’ve tied him up better.

The First Guy rushes up to her as she runs behind her chair and knocks it to the ground, creating a barrier between them.

He goes one way, she goes the other. Same again, switching sides. Like the first sequence of a tango.

Then – he LUNGES on top of her, forcing the knife through her left hand and into the wooden floor.

“Got you now, princess.”

His hands grab her crotch and rips off her thong. His fingers seek entrance.

With what strength Megan can muster, she raises her left hand to meet the shaft of the knife and presses her flesh against it’s hard base.

Megan makes the final push, as The First Guy starts to unbuckle his pants. And stabs him in the throat, with the knife still firmly lodged in the centre of her (perfect) hand.

Blood flows over her hourglass figure and stains the floor.

I always get what I want. 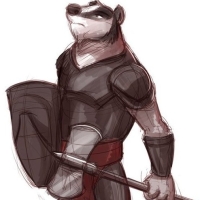